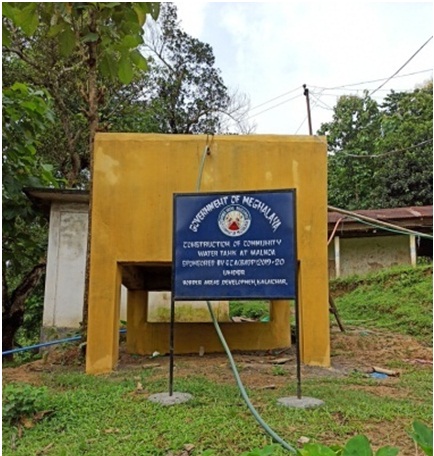 Name of the Scheme: Construction of Community Water tank at Malmua, Baksapara & Debajani @ 3lac each.

Providing community drinking water facilities for 3 locations i.e Malmua, Baksapara & Debajani was proposed by the Border Areas Development Office, Kalaichar under SCA (BADP) 2019-20 upon viewing the shortage of water supply and the unavailability of water connectivity in the area. These Villages are located high above the sea level. During dry season the womenfolk from the village had to walk some 4 – 5 Kms to fetch water and it has been an ordeal for many years. These Villages have 300 plus households with a population of about more than 1200.

The office upon receiving the grievances - their need for water – acted promptly and has made a feasibility survey so as to create possibility to draw water from nearby perennial sources and in consultation with the officials of the respective nodal department of PHE, necessary plan and estimates have been framed accordingly to put forth the proposal under SCA (BADP) and for which the office received a sanctioned amount of Rs. 9.00 lacs( Rs.3.00 lacs for each project). The implementation of the project commenced in the month of January, 2020 and brought to completion in the month of April, 2020.
Today, with the materialization of the project, the villagers have sufficient drinking water. The target for facilitating supply of drinking water to the people has been achieved and the importance and necessity of running the completed project by the constituted organized community as well as preserving the ecosystem of the water sources has been imparted and made aware to the inhabitants.

Name of the Scheme: Construction of Additional Classroom at Kangkangre

The Kangkanggre village with a moderate population is located at the far south east corner of Kalaichar and some 10 kilometres away from Zikzak Block. The population mainly consists of farmers and perennial cultivators.
The construction of L. P. School Building was proposed under SCA (BADP) with a total sanctioned amount of Rs. 5,00,000/- only. The main objective of the project is to facilitate proper school building with sufficient classrooms to accommodate some 50 children.
Upon completion of the school, the children as well as teachers now have proper school building and classrooms to shelter them from stormy weather and searing heat. The completion of the school building also added a sense of confidence as well as safety for the students and the teachers as they no longer have to worry for the shelter from rain and harsh weather.

Name of the Scheme: Training Programme on weaving for women group

The main objective of proposing this project in border areas is to promote the livelihood of vulnerable women group who are economically poor and hence, no source of income was available to support their family. The enthusiastic group of womenfolk approached the Border Areas Development Office, Kalaichar with a proposal to take up the training programme on weaving in their village.

The BADO Kalaichar has proposed this project for an amount of Rs. 5.00 lacs under BADP 2019-20 observing the importance of the project so that womenfolk can be imparted with skills and knowledge in weaving and earn their living in the future. A group of 20 women were involved in the training for a period of 3 months with a follow up programme of 1 month later The trainees who have performed well can be absorbed as commercial weavers in the Centre with the support of the Government. As they weave they will be able to learn more on making ethnic designs and at the same time make an income for their livelihood.

Further, this office has proposed for the setting up of weaving Centre to accommodate the handlooms already purchased for commercial production